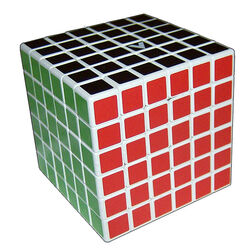 The 6x6x6 cube (normally referred to as the 6x6x6 or 6x6) is a twistable puzzle in the shape of a cube that is cut five times along each of three axes. The V-cube 6 incorporates a clicking mechanism designed to keep the hidden middle layer in alignment with the rest of the pieces. Several mods have been developed to fix this, most notably the memyselfandpi 6x6 mod, which involves eliminating the clicking mechanism and using pins instead to keep the inner middle layer in alignment. ShengShou released their 6x6x6 in mid-2011, and MoYu released their 6x6, the MoYu AoShi in late October 2014.