Feliks Zemdegs is an Australian speedcuber from Melbourne, Australia. He is the former eleven-time world champion and currently holds 1 world record including average times for 3x3. He is typically considered as the most successful competitive speedcuber in history, as he has held 121 world records and numerous Oceania records.

Feliks is a color-neutral CFOP solver, although he does know other methods such as Roux and Petrus. He knows numerous subsets of CFOP such as ZBLL, COLL, Winter Variation, etc. For 2x2, he uses CLL. For 4x4, he uses Yau method, and bigger cubes, he uses reduction and free-slice. He uses his left hand for OH. 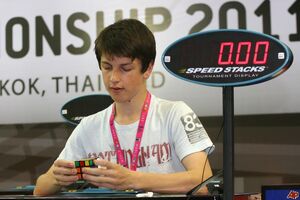 Past World Records(Fastest WR in each category)[]