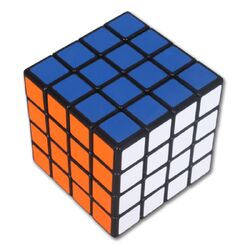 The Rubik's Revenge (also known as the Master Cube) is the 4×4×4 version of Rubik's Cube. Invented by Péter Sebestény, the Rubik's Revenge was nearly called the Sebestény Cube until a somewhat last-minute decision changed the puzzle's name to attract fans of the original Rubik's Cube.[citation needed] Unlike the original puzzle (and the 5×5×5 cube), it has no fixed facets: the centre facets (four per face) are free to move to different positions.

Methods for solving the 3×3×3 cube work for the edges and corners of the 4×4×4 cube, as long as one has correctly identified the relative positions of the colours — since the centre facets can no longer be used for identification.

The puzzle consists of 56 unique miniature cubes ("cubies") on the surface. These consist of 24 centres which show one colour each, 24 edges which show two colours each, and 8 corners which show three colours each. The original Rubik's Revenge can be taken apart without much difficulty, typically by turning one side through a 30° angle and prying an edge upward until it dislodges.

The Eastsheen version of the cube, which is slightly smaller at 6 cm to an edge, has a completely different mechanism. Its mechanism is very similar to Eastsheen's version of the Professor's cube, instead of the ball-core mechanism. There are 42 pieces (36 movable and six fixed) completely hidden within the cube, corresponding to the centre rows on the Professor's Cube. This design is more durable than the original and also allows for screws to be used to tighten or loosen the cube. The central spindle is specially shaped to prevent it from becoming misaligned with the exterior of the cube.[2]

There are 24 edge pieces which show two coloured sides each, and eight corner pieces which show three colours. Each corner piece or pair of edge pieces shows a unique colour combination, but not all combinations are present (for example, there is no piece with both red and orange sides, if red and orange are on opposite sides of the solved Cube). The location of these cubes relative to one another can be altered by twisting the layers of the cube, but the location of the coloured sides relative to one another in the completed state of the puzzle cannot be altered: it is fixed by the relative positions of the centre squares and the distribution of colour combinations on edge and corner pieces.

The 24 edges cannot be flipped, because the internal shape of the pieces is asymmetrical. Corresponding edges are distinguishable, since they are mirror images of each other. Any permutation of the edges is possible, including odd permutations, giving 24! arrangements, independently of the corners or centres.

Assuming the cube does not have a fixed orientation in space, and that the permutations resulting from rotating the cube without twisting it are considered identical, the number of permutations is reduced by a factor of 24. This is because all 24 possible positions and orientations of the first corner are equivalent because of the lack of fixed centres. This factor does not appear when calculating the permutations of N×N×N cubes where N is odd, since those puzzles have fixed centres which identify the cube's spatial orientation.

This gives a total number of permutations of

Some versions of Rubik's Revenge have one of the centre pieces marked with a logo, distinguishing it from the other three of the same colour. This increases the number of distinguishable permutations by a factor of four to 2.96×1046, although any of the four possible positions for this piece could be regarded as correct.

There are several methods that can be used to solve a Rubik's Revenge. The layer by layer method that is often used for the 3×3×3 cube is usually used on the Rubik's Revenge. One of the most common methods is to first group the centre pieces of common colours together, then to pair edges that show the same two colours. Once this is done, turning only the outer layers of the cube allows it to be solved like a 3×3×3 cube. However, certain positions that cannot be solved on a standard 3×3×3 cube may be reached. There are two possible problems not found on the 3x3x3. The first is two edge pieces reversed on one edge, resulting in the colours for that edge not matching the rest of the cubies on either face:

Notice that these two edge pieces are swapped. The second is two edge pairs being swapped with each other:

These situations are known as parity errors. These positions are still solvable; however, special algorithms must be applied to fix the errors.

One of several approaches to solve this cube is to first pair the edges, and then the centres. This, too, is vulnerable to the parity errors described above.

Some methods are designed to avoid the parity errors described above. For instance, solving the corners and edges first and the centres last would avoid such parity errors. Once the rest of the cube is solved, any permutation of the centre pieces can be solved. Note that it is possible to apparently exchange a pair of face centres by cycling 3 face centres, two of which are visually identical.

Retrieved from "https://speedsolving.fandom.com/wiki/Rubik%27s_Revenge?oldid=4815"
Community content is available under CC-BY-SA unless otherwise noted.